What started out as a Portland, Oregon area Thai food shack is now a slice of heaven I can’t stop thinking about.  Pok Pok, named for the sound a mortar and pestle make, is the best Thai restaurant in the US.  Bold statement, I know….I realize I haven’t exactly eaten at every Thai spot and you may think I’m crazy since you can’t get Phad Thai here.  But read on, I promise I’m right and should you try it out yourself you’ll also be a hooked addict.

Andy Ricker, painter, backpacker, musician, and chef extraordinaire started Pok Pok in his house.  It became so popular he opened more rooms, added picnic tables for seating, and opened The Whiskey Lounge in his basement for the long lines of people waiting (can you say brilliant!).

According to his website, they “serve food found at pubs, restaurants, homes and the streets of Southeast Asia…”We do not make “fusion” food here; everything has been researched, eaten, and/or prepared in the country of it’s origin prior to being put on the Pok Pok menu… We do not serve staples like Phat Thai or Penang Curry, but the food we do serve is very accessible to most people. ”  A bold  idea in a country full of palate challenged people.

We had had a bit to drink before we arrived (and I was exhausted from lack of sleep and jet lag), so I was deflated when we were told we’d have a 45 minute wait.  UNTIL they sent us to wait at the Whiskey Lounge (which is now across the street from the restaurant, not in the basement). 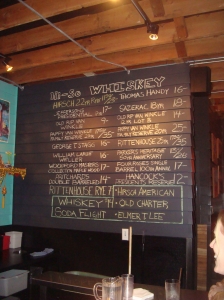 When you enter the Whiskey Lounge, you are transported to a funky, red lantern, bar with an underground vibe.  I shared a whiskey flight with my friend Ed, which we (he) thoroughly enjoyed!  I also had a bubble beer (called bia wun), which is nearly frozen, slushy style.  I can only imagine how good it would be on a hot summer day! When the bartender told us our table was ready we stumbled across the way. A small, intimate, dark but lively place, we had a great table in the corner where we could see all the action.

We had no clue what amazing things were in store for us.  They serve family style so we ordered an assortment, of which a few were: 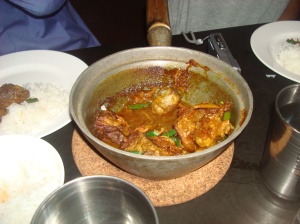 The Kaeng Hung Leh (only $12 for a big bowl) is a Northern Thai sweet pork belly curry with ginger, palm sugar, turmeric, tamarind, Burmese curry powder, and pickled garlic (Chiang Mai classic with Burmese origins).  The dish is rich, spicy, and fragrant.  It was the first thing I tried and I nearly melted into my seat.  There is a slight hint of curry, but also developed flavors of a meaty stew, a bit of spice, and pork as tender as your granny’s Sunday pot roast. What a way to start a meal. 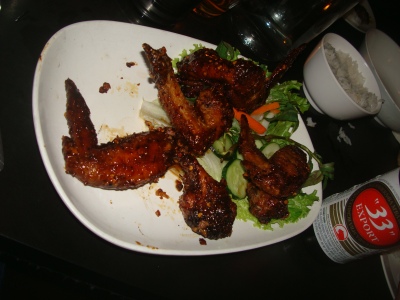 Next were Ike’s Vietnamese Fish Sauce Wings, also only $12 for a big plate (already half eaten in the pic above). They are chicken wings marinated in fish sauce and palm sugar, deep fried, tossed in caramelized Phu Quoc fish sauce, and garlic and served with Vietnamese table salad. It is based on their daytime cook Ike’s recipe from his home in Vietnam and named one of the 10 best restaurant dishes in America 2007 by Food & Wine magazine.  I found the recipe online and it is at bottom of this posting.

Ike, will you marry me?  Seriously…?  Hands down, we agreed these were the best wings any of us had ever tasted. Perfectly carmelized, crunchy from frying, slightly sweet but also spicy (we ordered extra spicy) with succulent, moist chicken. This is what I have been dreaming about since our visit. Pure perfection.

Our third favorite was the Muu Paa Kham Waan (only $12 as well). This dish is boar collar meat (don’t be grossed out, boar is actually really good) rubbed with garlic, coriander root, and black pepper, glazed with soy and sugar, grilled over charcoal and served with chilled mustard greens and spicy chili/lime/garlic sauce. The menu says its a northern Thai drinking food. Basically, it was tender boar cut into small chunks with a spicy chili sauce on top. The spice was warm and grew to really hot a few minutes in, but it wasn’t so hot you couldn’t taste the developed, complex flavors of the boar and sauce. When it gets to be a little too warm, you munch on a mustard leaf, which has been covered in shaved ice. The coldness and slight bitter nature of the greens are truly an antidote. Our friend Jacob would’ve eaten the whole thing if we didn’t dive in for more!

Even their water was special.  Eventually I found out it is it flavored with Pandanus leaf, as is done often in Northern Thailand, which gives it a toasted rice/vanilla/grassy flavor.  There were four of us and we ate and drank until our hearts were content (plus a little more maybe).  Appetizer, drinks (lots of them), 5 entrees, dessert = $75.   What an absolute bargain.

I keep thinking about Pok Pok, wishing I were there to enjoy it again and wondering if it is a glimpse of the amazingly wonderful food I’ll find when I’m in Thailand in a few weeks. In fact, I’m now going to change my itinerary to incorporate Chiang Mai just to find food like this….All in all, this is a place, an institution, a gastric temple that should be celebrated!

Some of Andy’s recipes were published by Food & Wine and can be found here:  http://www.foodandwine.com/chefs/andy-ricker