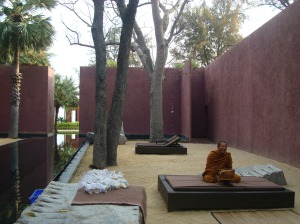 The Thai are both a devout and superstitious people. In taxis you’ll find flowers hanging from rear view mirrors as good luck, you’ll hear prayers whispered in a few words, and see small Buddhist shrines everywhere. These shrines are important, sometimes taxis will even lightly honk at them as they drive by for luck. Thais make offerings of simple but meaningful gifts such as soup, water, flowers, etc. It is both charming and fascinating to a westerner such as myself.

I’ve enjoyed hearing stories and watching the rituals despite that I’m not in the least bit religious. Thais call these mini-shrines shan-pa-poom (my spelling). Each house has one and someone makes an offering to it every day.

In addition, there is a ceremony called Tak Bart, in which prayers are made, blessings given, and offerings to monks made in the form of food. This is how the monks subsist and the blessings are meant to nurture your body and soul.

I had the opportunity to observe Tak Bart and was quite honored to do so. A senior monk sat on a platform with a sacred vessel in front of him. Prayers and chants were said for about 20 minutes. At times the faithful repeated them, bowed to the floor, and during the entire ceremony hands were held in prayer.

After the blessings were complete, each person offered food. It was placed in the sacred vessel and a bow was offered.

I believe in learning about cultures and experiencing new things, not just sitting at the beach in oblivion (although that is exactly what you need sometimes). I’m glad I took the time to do this during the R&R portion of my expedition. I hope you do something similar during your next voyage!