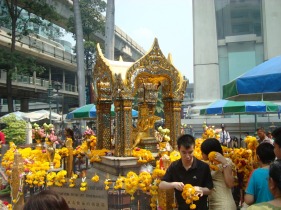 After a day of temple sightseeing, I was hot, sweaty, and covered with what I liken to ‘airport funk.’ I’d hopped out of the cab just before my hotel because traffic was at a complete standstill. Adjacent to the Hyatt is the Erawan Shrine. Listed in all the tourist books and a shrine for Buddhists to give offerings and pray, it is a horribly crowded spot. After fighting through the throngs of people, I finally reached the side entrance to the hotel.

Sitting on the steps was a little Thai girl about as hot and cranky as I was. Scowling away, she was none-the-less adorable and instantly gave me pause. Clearly she wanted to be anywhere else, but her family was apparently paying homage to Phra Phrom. I asked the woman with her if I could take her picture. After snapping away, I sat next to her and offered a red lollipop. Suddenly her face transformed with a smile a mile wide.

It occurred to me that kids are all the same at heart no matter where they are from. Good moods, bad moods, love of candy. Actually, that goes for adults as well. We would be well served to remember that… 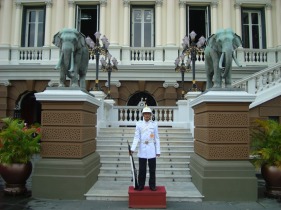 Afterwards, in my room I recalled another incident from earlier in the day that reinforced my thoughts. There were young men serving as guards at the Grand Palace area. Of course, tourist that I am, I took their picture and gave them a big smile to see if they would budge. An hour later or so, as I was about to leave, the same two guards came running up to me. Not sure what to think, I obediently stopped and held my breath. Was I to be arrested for my scandalous ankles? Did they find out I secretly snapped a forbidden picture in the building where kings lie in state? Was something I did enormously offensive?

Nope. It turns out they just wanted to take my picture, too. They found it amusing that a western woman was by herself and wanted a picture with someone who had blue eyes. Ultimately we are all pretty much the same, just with different colored eyes!