Day 6
My leisurely morning sans alarm clock didn’t go as planned. I was rudely awakened by a work call at 5am. This work stuff really gets in the way of fun sometimes. The good thing is it got me up to see the sunrise over Poipu Bay. I watched it from my balcony for about 30 minutes with a big fluffy, soft robe on and a cup of java in hand. It was beautiful with manicured gardens in the foreground and the ocean beyond.

For breakfast, I went down to the Regency Club (an area that serves breakfast, snacks, and happy hour only for frequent travelers). I was greeted with a bubbly glass of Champagne (who could turn that down?). After two glasses, I knew paddle boarding would be delayed until tomorrow. But that’s okay, because I’m on Hawaii time (a phrase locals say to tourists all the time….a la ‘don’t worry, be happy’). For breakfast, there was an odd assortment, I suppose to satisfy folks from all around the world. I could’ve had miso soup (extra seaweed optional), buckwheat pancakes, Chewan Mushi (Hawaiian dish of steamed eggs with mushrooms), or even boiled eggs and thick sliced bacon with a bit of rind on it). I went for the bacon and sticky buns….my diet willpower has disappeared!

I headed down to the beach, with a plumeria flower tucked behind my ear. Plumeria is the blossom they use for leis and other decoration. There weren’t many people around yet, so I got a plum hammock spot, situated between the ocean and a saltwater lagoon that runs parallel to the ocean for the entire width of the Hyatt property. I settled into the hammock (without falling out, even after a few glasses of Champagne) and began to write up a rough outline of a business I could start here…..drum roll, please….culinary tours of local growers, restaurants, cultural food, etc. There aren’t any here yet (maybe for a reason)?

A few moments later a waitress arrived with a Mai tai in one hand and a bloody Mary in the other. Apparently they had marked in my records that I like both. I chose the Mary. And so continued my morning of lush-dom. There was a gentle breeze, temperature was around 78 (but a warm 78)…another great opportunity to be alone with my thoughts…Well, I did have Mary to accompany me (several times actually, extra spicy!).

For lunch, my arse didn’t move an inch. They brought me a teriyaki burger with some terrific sauce. I wish my uncle the chef were here to help me figure out what was in it. There was also a small bag of Maui potato chips. I looked at the back and discovered they were made by Frito Lay – talk about sneaky marketing. So much for trying to eat local, but the burger was really good. It is a local custom to have teriyaki on/in your burger.

In the afternoon, I did move, but only a little. I got a floaty chair and plopped into it (without spilling my beer-yes I had moved on from Mary!). I lazily floated around the lagoon reading and napping with the sound of the massive winter waves lulling me to sleep. Thank goodness for SPF 50!

For dinner, I ate at the Hyatt, which wasn’t anything spectacular, beef satay. Now I’m off to my room to take my slippers off (Hawaiians refer to flip flops as slippers), open the balcony doors so I can listen to the ocean, and settle into bed.

Paddle boarding tomorrow and perhaps a drive around the Waimea Canyon!

Day 7
This morning I woke early for a paddle board lesson. For breakfast I stopped at a little hole in the wall, I not sure it even had a name, but it did have an item called the ‘loco moco.’ It is a local dish that starts with rice on the bottom, hamburger, and eggs on top, then covered in a brown teriyaki sauce and caramelized onios. It was enough to feed four, but it was so good, I managed to eat almost half of it. The diet has been completely abandoned!

With a full belly, I headed to paddle board on Poipu Bay. My instructor was seriously hot, with an extraordinary tan and bright blue eyes. It took me about 15 minutes to get it down pat (paddle boarding, not the guy!), despite the rough waves and blowing wind. I guess growing up doing water sports all my life helped. He was quite impressed I got it so fast and suggested we head farther out into the really big waves. I got pummeled a bit, but stood for long intervals. The only problem is when you wipe out, sea water infiltrates all your sinuses, which consequently drain. I wasn't worried about the board, balance, or paddling…I was doing well. Rather I was worried about my sinuses and what was making an appearance above my lip, which was NOT sexy! It is extremely hard to stand, surf, paddle, and wipe your nose at the same time without literally wiping out, which would in turn make it worse! It must have been okay because afterwards he gave me a big bear hug and suggested I meet him in Hanalei tomorrow to paddle board the river. I dont know what this place has done to me, but I am suddenly a woman in demand! My mom always says I just need to 'turn my light on.' I think it must be on now!

After boarding, I decided to head over to Kalaheo for lunch at Ohana Cafe. Unfortunately it was closed…they are apparently on Hawaii time, too! So I wandered over to the Kalaheo Cafe and Coffee. I was still sopping wet and a little sandy, and just wanted something warm. Their lentil soup with homemade wheat bread was so comforting, it hit just the spot.

At this point it was time for dessert. There were two places in nearby Hanapepe I wanted to check out. One is a bakery in a run down Chinese restaurant called Wongs. All the publications I read said they make the best lilikoi chiffon pie on island, so I had to give it a try. I bought a slice each of lilikoi and guava chiffon to sample. Both were good, but not worth a special trip if you aren't nearby. I had better lilikoi at the Village Snack and Bakery in Hanalei. Just caddy corner across the street from Wongs is Lapperts Ice Cream and Coffee, all made on premise apparently. I had one keiki scoop (child portion) of their signature Kauai pie (kona coffee, fudge, coconut, macadamia, vanilla) and one of caramel coconut macadamia. They were so good, creamy and crunchy, sweet but not too much so. What a life!

From there I headed back to the Hyatt, as I was pretty much salty, soggy, and sleepy. However, the sugar kicked in en route and I decided to drive past the hotel just to see what was around the corner. It was unknowingly a great decision. The road became dirt and there were signs posted that it was private property but if you go to the beach, be out by 6pm. I drove along washboard roads for what seemed Ike forever….I know, I can already hear you saying, "You crazy woman, what are you doing driving around rural dirt road nowhere by yourself?" My response is that the kind of adventure I crave can't be found in a Hyatt hammock (however lovely a hammock).

At the end of the road I was treated with a sublime experience. A nearly deserted beach called Maha'ulepu that went for at a least mile with nothing in sight except ragged cliffs, coconut trees, and an endangered Monk Seal taking a nap. It was by far the most beautiful beach I have ever seen. As I walked all the way to the end I saw a native Hawaiian family preparing for a real luau. They were unburying the pig, kids were running about, and hula dancers were getting ready. What an extraordinary site! How lucky am I? I wish I could have stayed to watch, but I didn't want to invade their privacy. As I was leaving I noticed a sign for the Gillin House. It turns out to be the only beach house for miles, in fact in the whole Maha'ulepu Valley, and it is available for rent. Wow! Next time, I'm there. 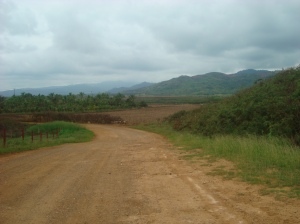 I headed back to the room to get cleaned up and went to dinner at Plantation Gardens. The sugar had worn off and I wanted to go somewhere close. I was treated to a fantastic glass of Pinot and seafood lau lau (ahi, prawns, scallops, julienned veggies all wrapped in Ti leaves and served with steamed brown rice with furikake on top, and wasabi aoli). By far, this was the best meal I have had on island so far. Then it was time for dessert (yes, I know-not my first or even second dessert of the day!). I had the ‘Local Lilikoi Cheesecake’ (sun baked creme fraiche and passion fruit cheesecake on a Graham cracker crust). You could have rolled me home, I was so full and happy!

Tomorrow is a half day of zip lining through the jungle and perhaps a visit to a goat farm. Woo hoo!

PS
Do you know what the meaning of ALOHA is?
The literal meaning of aloha is “the presence of breath” or “the breath of life.” It comes from “Alo,” meaning presence, front and face, and “ha,” meaning breath. Aloha is a way of living and treating each other with love and respect. Its deep meaning starts by teaching ourselves to love our own beings first and afterwards to spread the love to others.

According to the old kahunas (priests), being able to live the Spirit of Aloha was a way of reaching self-perfection and realization for our own body and soul. Aloha is sending and receiving a positive energy. Aloha is living in harmony. When you live the Spirit of Aloha, you create positive feelings and thoughts, which are never gone. They exist in space, multiply and spread over to others.